Solar installation costs do not include the 30% federal investment tax credit or local incentives. Savings estimates do not account for utility net billing rates.

Save money by installing solar panels in IN. 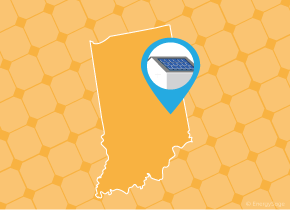 Good news Hoosiers: the Indiana legislature has been making strides toward strong solar policies and a bright solar future for the state! This Midwestern state is home to solar easement laws, net metering availability, and various tax exemptions. These financial incentives make going solar a great option for property and business owners in Indiana.

How much do solar panels cost in Indiana?

Another calculation that potential solar buyers have to consider is the solar payback period. This term tells us as at what time you will recover your initial investment through electricity savings from your solar system. For Indiana, the average solar payback period is 12.29 years.

See the cost of solar in IN cities and towns

What solar panels should I install in Indiana?

How much energy can I get from solar in Indiana?

Aside from the power output of the solar equipment you choose to install, the amount of energy you generate with solar panels in Indiana is directly related to the amount of sunlight that hits your panels. Indiana ranks low in terms of average peak sun hours, but in-state policies and incentives still make it worth it to go solar in state.

Solar incentives in Indiana can help you reduce the overall price of going solar. Learn more about why solar panels are such a great investment in Indiana.

Learn about solar incentives in IN

What rebates and incentives are there in Indiana for solar?

Besides the federal ITC, Indiana has additional incentives for going solar that are dependent on your area and utility company. Of note there are generous tax exemptions for renewable energy property taxes, and Indiana sales taxes. Additionally, Indiana has established a strong net metering program and solar easement laws, helping to make solar purchases a great deal. To learn more about Indiana’s best financial incentives for solar, check out our complete overview of the state’s best solar incentives.

In the Hoosier state, solar energy has recently become a critical piece of future energy plans. Over the past decade, there has been a rush of solar development in Indiana: the state ranks 23rd in SEIA’s national rankings in 2019, with a total installed capacity of over 315 megawatts (MW). And the development continues: 2018 marked the state’s largest year yet for solar installations. While state level policies and incentives have been crucial in helping establish the industry, there remains room for even more growth: Indiana is ranked highly in potential for rooftop solar.

The first piece of solar legislation enacted in Indiana was the Solar Easement Laws in 2002. Although the policy doesn’t provide any financial incentives, it prevents planning and zoning authorities from obstructing or restricting the use of solar energy by a property owner. These laws are helpful for working with neighbors to ensure a solar installation isn’t covered by shade, which would limit the amount of solar energy it produces.

In 2004, Indiana policymakers initiated the state’s net metering program. Net metering policies are vital for the growth of solar energy markets throughout the U.S., as they allow residents to send net excess electricity back to the grid and in return get credits on the electric bill from the utility. For Indiana, the net metering program requires utilities to compensate customers with net excess generation in the form of a kilowatt-hour (kWh) credit at the retail rate, rather than the lower wholesale rate. Additionally, credits roll over indefinitely, helping residents who invest in solar to further decrease their solar payback period.

Importantly, legislation approved in 2017 under Senate Bill 309 will change the state’s compensation system for distributed generation by phasing-out the retail rate net metering by the beginning of July 2022. The new credit rate will be 1.25 times the average wholesale rate. Current net metering customers will remain on their current credit compensation plan until July 2047, while customers who join the program before the phase-out can earn the retail rate until July 2032.

Additionally, Indiana provides two types of tax exemptions that have made solar energy more attractive for diligent residents. The first of these is the Property Tax Exemption in 2010, which helps properties with systems using solar thermal, photovoltaic (PV), and other solar energy to avoid increased property taxes as a result of the installation. Indiana followed this legislation in 2012 with the Sales and Use Tax Exemption for Electrical Generating Equipment, which removes sales tax for solar equipment that is directly involved in the production of electricity such as solar modules, racking, and inverters (i.e., most non-labor costs of an installation).

Beyond state-level incentives, one of Indiana’s utilities is now also offering solar incentives to its customers. In 2015, the Northern Indiana Public Service Corporation (NIPSCO) enacted a feed-in tariff program for its customers offering $0.17/kilowatt-hour (kWh). Solar power performance payments such as NIPCO’s are critical for reducing the payback period for investments in solar.

Indiana has the opportunity to fundamentally transform the solar and renewable energy market by enacting a stronger Renewable Portfolio Standard (RPS). The state made major strides in 2011 by passing their first RPS program, titled the Clean Energy Portfolio Goal, which calls for 10 percent of electricity to be supplied by renewable energy by 2025. However, it remains a voluntary goal: if the policy were a mandate, the target were increased, or both, utilities in Indiana would be required to further embrace the renewable energy transition.