Save money by installing solar panels in MA.

Favorable incentives and high electricity costs make the Bay State one of the most popular places to go solar in the United States. 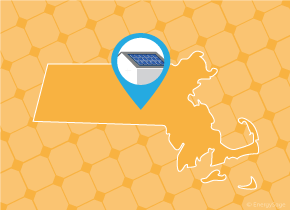 Driving through small New England towns in Massachusetts, solar panels dot roofs and properties across the state. As a state perhaps better known for its inclement weather than its clear days, how did the Bay State become a national leader in solar? A combination of high electricity prices and policy will to drive targeted rebates and incentives ultimately contributed to favorable economics of solar in the state.

How much do solar panels cost in Massachusetts?

See the complete list of top solar installers in Massachusetts

See the cost of solar in MA cities and towns

What solar panels should I install in Massachusetts?

How much energy can I get from solar in Massachusetts?

Aside from the power output of the solar equipment you choose to install, the amount of energy you generate with solar panels in Massachusetts is directly related to the amount of sunlight that hits your panels. Massachusetts, among many other states in the Northeast, does not receive nearly as much sunlight as the rest of the country so annual energy produced will not consistently be as robust compared to that of the sunnier states. While it is helpful to know the amount of energy output you can expect from your geographic region, the incentives and policies of the state are much more significant factors for finding the best deals and returns.

Learn about solar incentives in MA

What rebates and incentives are there in Massachusetts for solar?

Besides the federal ITC, Massachusetts has additional incentives for going solar that are dependent on your area and utility company. Of note are the availability of net metering, cash incentives from selling Solar Renewable Energy Certificates (SRECs), low-interest loans from the Mass Solar Loan Program, and tax exemptions for sales and property taxes. To learn more about Massachusetts’s best financial incentives for solar, check out our complete overview of the state’s best solar incentives.

While Massachusetts would not seem to be an ideal region for solar power as compared to sunnier and clearer climates elsewhere in the country, the state arranged policies and incentives that resulted in one of the strongest solar markets in the U.S. As of the end of 2018, Massachusetts had installed the 7th most solar power of any state in the country, installing nearly 2,300 megawatts (MW) of capacity, which provides nearly 9 percent of the state’s electricity.

Following the oil crisis in the 1970s, incentives were introduced at the federal and state levels to encourage domestic energy usage, including via solar energy. Massachusetts embraced this opportunity to spearhead renewable energy policies, enacting a range of tax credits and exemptions that remain largely unchanged to this day. In 1982, the state further encouraged local solar energy development when the Massachusetts Department of Public Utilities (DPU) authorized net metering policies for renewable energy systems with a generating capacity up to 30 kilowatts (kW).

The restructuring of the electric industry proved critical for Massachusetts in laying the foundation for a solar boom to emerge. In 1997, the state’s Electricity Restructuring Act passed with the goal of allowing competitive market forces to reduce electricity prices and to provide customers with choice for their retail electricity supplier, including the option to self-generate through solar energy. Additionally, the 1997 legislation established both a Renewable Portfolio Standard (RPS) and a public benefits fund for renewables, making Massachusetts the first state to have enacted both policies.

Though the RPS didn’t take effect until 2002, when the Massachusetts Department of Energy Resources (DOER) finally adopted the regulations, the public benefits fund—known as the Massachusetts Renewable Energy Trust Fund—took effect immediately. The program is funded through an electric-bill rider of $0.0005 per kW-hour, making the Fund supported by customers of all investor-owned electric utilities and municipalities with competitive procurement.

Continuing to move solar in the state forward, in 2007, with only 3 MW of solar energy then installed in-state, Governor Patrick set Massachusetts on a path to install 250 MW of solar energy by 2017. Impressively, the state achieved the goal four years ahead of schedule, influenced in large part by several pieces of landmark environmental legislation, including the Global Warming Solutions Act (GWSA), the Green Communities Act (GCA) and the Green Jobs Act (GJA).

In fact, these three climate policies continue to inform energy policy decisions in state today. The GWSA made Massachusetts one of the first states to legally address climate change, as the legislation requires monitoring and regulating greenhouse gas emissions (GHG) with a goal of reducing emissions 80 percent below the 1990 GHG emission levels by 2050. The Green Jobs Act created the Massachusetts Clean Energy Center (MassCEC) to, among other things, administer solar rebate programs through the Renewable Energy Trust Fund. Finally, the GCA specifically encourages small-scale residential solar installations by significantly expanding net metering and enabling virtual net metering, allowing for community solar. The net metering caps have been revised upwards on a number of occasions, including in April 2016 as the aggregate capacity limits for distribution companies were increased to 7 percent private and 8 percent public.

Additionally, the GCA significantly expanded the RPS with a clear solar goal—or “carve-out”—through the creation of the Solar Renewable Energy Certificates (SREC) program. The SREC program allows solar owners to sell credits for their solar generation back to the grid or to third-party brokers. The DOER first implemented this program in January 2010 through SREC I. A second solar carve-out —SREC II—quickly followed in 2014 and was phased out as the state achieved a 1,600 MW target for installed solar capacity. In 2018, the Solar Massachusetts Renewable Target (SMART) program became the latest initiative to hit the state solar market and mandated an additional 1,600 MW of solar energy across Massachusetts.