Save money by installing solar panels in WA.

Property owners throughout the Evergreen State are taking advantage of the economic and environmental benefits of solar power. 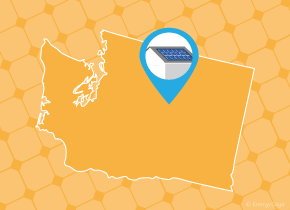 While Washington may be cloudy more days than not, the solar outlook in the Evergreen State is quite bright. Washington is a model example of a state that does not let weather stop it from exploring the many benefits of solar energy. Solar incentives such as net metering availability and solar easements and rights help make Washington a great place to go solar.

How much do solar panels cost in Washington?

See the complete list of top solar installers in Washington

See the cost of solar in WA cities and towns

What solar panels should I install in Washington?

How much energy can I get from solar in Washington?

Aside from the power output of the solar equipment you choose to install, the amount of energy you generate with solar panels in Washington is directly related to the amount of sunlight that hits your panels. While sunlight is not always plentiful in Washington, residents of the Evergreen State can feel fortunate that their state offers steady financial incentives for going solar.

Washington is becoming known for its great solar incentives and programs, which are considered some of the best in the country. Learn more about why solar panels are such a great investment in Washington.

Learn about solar incentives in WA

What rebates and incentives are there in Washington for solar?

Besides the federal ITC, Washington has additional incentives for going solar that are dependent on your area and utility company. Of note are net metering availability and solar easements and rights. To learn more about Washington’s best financial incentives for solar, check out our complete overview of the state’s best solar incentives.

For the Evergreen State, solar energy has become a critical part of its future energy plans. Over the past decade, there has been a rush of solar development that now places the state at 30th in SEIA’s national rankings with a total installed solar capacity of over 175 megawatts (MW). Encouragingly, Washington installed the most single-year capacity of solar energy in the state’s history just this past year. While declining solar technology and installation prices have made consumers more attracted to solar, state level policies and incentives have been crucial in helping establish the industry.

The first solar policy Washington enacted came in 1979, when the state implemented the Solar Easements and Rights Laws. Although the policy doesn’t focus on financial incentives, it recognized solar energy usage as a property right and ensured that proper sunlight is made available to those who operate solar-energy systems.

In 1998, the state of Washington established net metering. Across the country, net metering programs have been crucial for the solar energy industry by allowing residents to send surplus net energy in the electric grid and receive compensation for it on their energy bill. In the Evergreen State, ratepayers with home solar systems of up to 100 kilowatt (kW) are compensated at the retail rate for excess generation exported onto the grid, a better compensation than the wholesale or avoided cost rate used in other states. However, any net solar surplus accumulated and not used is forfeited to the utility on April 30th of each year, without compensation.

The next notable piece of solar legislation passed in Washington is the state’s renewable portfolio standard, which was signed into law in 2006. Like net metering, state energy requirements have been instrumental in the development of clean energy across the nation. Washington’s Renewable Energy Standard requires utilities to supply 15 percent of their electricity sales from renewable energy by 2020.

Beyond its net metering and RPS policies, Washington provides a few additional financial incentives to make solar more accessible to everyone in the state. The first of these incentives is the Renewable Energy Cost Recovery Incentive Payment, which began in 2006 and lasted until 2018. The policy was crucial to the solar industry during its lifespan, as it paid $0.12/kWh - $1.08/kWh for solar generation for a maximum of 15 years, depending on project type, technology type and equipment manufacturing location. In fact, the policy was so successful and popular, funding for the program was exhausted three years earlier than anticipated. Another financial incentive for Washington residents is the Renewable Energy Sales and Use Tax Exemption, introduced in 2009. For solar home systems 10 kW or less in capacity, the state exempts solar owners from the sales tax associated with installing solar, helping decrease the cost of solar even further.